A word from the Innovator’s armchair: John Petersen

What does innovation mean in 2022 to an award-winning innovator?

We sat down with John Petersen, Co-founder of Advanced Technology Products, to hear a little more about the incredible invention of VESDA, which now protects people and infrastructure right across the world.

What inspired the creation of VESDA?

At the time when early warning smoke detection devices were introduced, they were designed for ordinary buildings without air conditioning where ventilation came from open widows. As industry developed higher level technology facilities, computer centres and air conditioning became the norm, it was apparent that smoke detection processes in Australia were grossly inadequate for the job at hand.

I was working in the Postmaster-General’s Department (PMG) at the time and a chance discussion with CSIRO brought something to light, an opportunity to test and develop a technology that brought about the VESDA (Very Early Smoke Detection Apparatus) which was years ahead of anything available on the market.

So what is VESDA and how does it work?

VESDA is the gold standard in early smoke detection. The smoke detection technology that was prior to VESDA came out of Switzerland, and was found not to be sensitive enough for the early detection of smoke particles in the air.

What we had hit upon with CSIRO is called light scattering, whereby a small sample of air passes through a chamber that has high-intensity light flashing in it. This produced a hugely sensitive response to early smoke particles. So, while the rest of the industry was trying to make their equipment more sensitive, we were working to make ours less sensitive! This led to the development of VESDA which is now used all over the world.

Did you receive any backlash while you were working on the design before everyone realised what an incredible innovation it was?

A mild war went on between the PMG head office and the regional offices in Melbourne. Head office wanted to take on the project as national development without a real understanding of all the requirements. We were the workers on the ground with a real understanding of what was needed in Victoria and so we persisted, undermining head office, and continued with our developments to produce a product that worked.

What does innovation mean to you?

Freedom. Freedom to pursue an idea.

You have to understand the environment we were working in was dictated by your role and your job description. So if a light bulb moment occurred it would often be like ‘Oh well, we can’t deal with that, that’s not our role.’

In this case I was not alone, and it was obvious there was a better solution. I was in the right place at the right time to see it through.

What does it mean to you to see the legacy of your work with VESDA carried on in organisations like ATP and Honeywell?

I’m pleased that I was able to play a significant role, more by luck than any planning.

I’m pleased that I was able to make a contribution to something that’s gone on to become so universal and so effective. 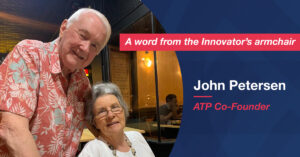